This page is devoted to the innocence students display daily with their school nurses.  If you would like to share a “funny” that will help lighten your colleagues’ day, visit All-in-a-Day Submission Form to submit your story. 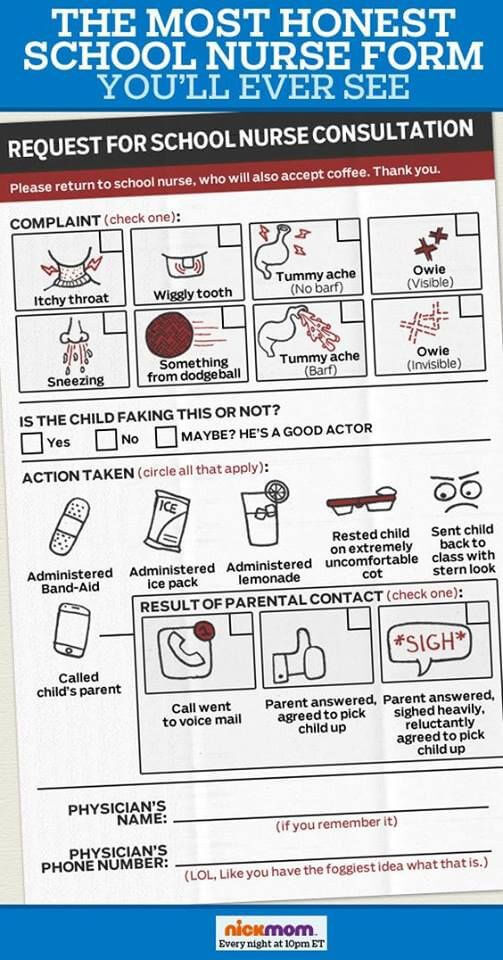 From Linda of Weslaco, TX

Once a high school student came in asking for trash bags, I asked him for what? He said he had blisters on both feet from wearing his boots…I said he shouldn’t be wearing them if they gave him blisters, and wouldn’t he want band aids instead? He looks at me like I’m crazy and says, “I need the bags so my feet can slide in, otherwise they won’t fit! Also I need to wear them because they go with my hat” … Of course they do!

From Lynne of North Ridgefield, OH

Several years ago I had a kindergartner come into the clinic with a mild complaint that I don’t remember, but he asked if I felt okay. Thinking how sweet it was for him to ask, I said, “Yes.” Then I made the mistake of asking what made him ask. He said I looked older than the last time he saw me in the clinic. He asked how old I was and I foolishly said, “How old do you think I am?” When he answered, “100?”, I said with a smile, “Not quite”. With a very serious, concerned look on his face, he said, “99?”. I chuckled and said that was close enough and sent him back to class.

From Dmitri of Frisco, TX:

A goofy hearing and vision story…   I was doing H&V screenings on my 5th graders, I asked a girl to read the letters on the screen to me.   She’s been here since kinder, so she’s done this process a few times before.  She says, “say it out loud?  I say, “No, I’m a mind reader.”  Oh kids, so crazy!

From Jalyn of Washington, IA:

This is my first year as a school nurse.. So I’m a little nervous and unsure of what to take seriously vs what is just them wanting to make a trip to the new nurse. 🙂

Me: (seriously confused and a little worried) “Your heart hurts?!”

Me: (More worried and wanting to rule out GERD symptoms) “It’s okay honey, can you point to where it hurts?”

Kinder: “I don’t know Nurse Jalyn, wherever my heart is.”

It took everything in me to keep a straight face.

From Kelly of North Bend, OR:

I had an elementary student come in with a new chief complaint of significant bilateral hearing loss. Upon exam, I could see the pink eraser from the end of a No. 2 pencil in each ear.  I gloved up, and gently removed each eraser tip. The student immediately exclaimed “I can hear again! it’s a miracle!! (really- that’s the words they used.)  I told them they should never put anything in their ears smaller than their elbow, sent them back to class, informed the parents by phone message, and texted the Principal that we had performed a successful bilateral eraser-ectomy…

At 7:40 this morning, I had a kindergarten teacher bring a VERY ACTIVE, not always truthful student to the clinic.  The student had stated he threw up this morning … we had no clue if he had or not.  I took the child’s temp, high end of normal, but the student stated he had medicine this morning.

I asked dad if the child vomited this morning, he said NO.

I was about to send the student back to class when dad says, “He had diarrhea and he spit up the Imodium”

I literally pulled the handset away from my ear and stared at it.

From Amy of Frisco, TX:

Boy fell at recess hurting his elbow.   He came into the clinic holding his arm.

I asked him if he had any numbness or tingling in his fingertips….Of course he did.

When I asked if I could look at his elbow he said, “Here, I’ll just take my sweatshirt off, I’m hot anyway”.  Flailing his “hurt arm” around trying to get sweatshirt off.

Afterwards, I asked him how his arm felt now.  He looks me in the face and says ‘I still can’t move it.  It’s broken or something”.

Me: (looking at them because her hands are obviously not holding it) Where is it?

Me: Okay, when did you lose it? (thinking she probably lost it at home)

5th grader: It was loose so then it came out, and I put it in the tissue

Me: So where’s your tooth?

Me: OOOOOOOOh… you literally lost it.

In all fairness, she told me she lost it. Sigh… took me a while to get it ?

I had a FIFTH grader come to the clinic this morning c/o itchy eyes.  I explained I had eye drops (lubricating eye drops) and that would help the irritation.  So we put eye drops in one eye and then the next eye.  The student then got hysterical screaming,  “I can’t see!! I can’t see!!” I told him to open his eyes.  It’s way too early…

I had a Kinder friend come to visit today.  His teacher came too.  The teacher says “A has to poop.”  I am a little confused as to why they are in the clinic, but ok…  She leaves and the student says, “I don’t have to poop, my arm itches.  I didn’t know if she would let me come to the clinic because I was itching, but I was pretty sure she would let me if I had to poop.”

2nd grade boy comes in after bumping his head at recess:

Student: “…and after I fell my eyes stayed closed for a long time so I don’t think that’s good”

Me: “Why were your eyes closed? Did you close them?”

Student: “Yes. I didn’t want woodchips to get in my eyes.”

From Zoila A. of Frisco, TX:

A third grade student comes running into my clinic. She is sweaty and out of breath from running in from outside. She yells, “Help! Ms. V said to get the nurse because a kid cut their leg outside and is bleeding.” I grab my emergency bag and walkie and run outside as they are out at the neighboring park/field. When I get there, I am met by a confused look from Ms. V as she states, “I said get a band aid, not the nurse.”

From Beth S. of Frisco, TX:

A student was walking the track with his teacher for one of his movement breaks when he started running. Suddenly he stopped and appeared to be trying to catch his breath. The teacher asked him if he had asthma. He asked what that was so she explained it to him. He said “No, I don’t have that, but I sure wish I had my inhaler!”.

While assessing a student’s peak flow value using a PF meter, a student waiting to be seen exclaimed, “That’s how my daddy starts his car!”  I acknowledged her comment with a smile and returned to assessing.  About 30 seconds later, I summoned all of my strength to stay focused and suppress a giggle when I realized she was referring to a car breathalyzer (not a funny matter but certainly a humorous moment)!

I had a little one (1st grader) present in the Clinic due to wheezing.  After assessing her and administering the first of two puffs from her inhaler, she asked me how someone gets asthma and if one is born with it.  She then exclaimed, “I promise, I’ve never smoked!”  I needed that laugh!

I just had a student visit the Clinic for an earache.  She said her little brother was starting kindergarten next year and that “he’ll probably come see you all the time.”  I asked why ( I shouldn’t have)…  “Because he eats his boogers as his midnight snack.”

Glad lunch is already over…